Keoni and Sasha use the Pythagorean Theorem and the definition of a parabola to derive an equation of parabola with a p-value of 5 and a vertex at (9, 13).

At [0:48], Keoni is unsure whether to draw a segment from the general point to the vertex or to the focus.

➤ Sasha and Keoni resolve the issue by reminding themselves of the definition of a parabola. They recall how they can use the definition to represent the lengths of the sides of a right triangle.

1. [Pause the video at 1:54].  What is the distance y? How would you represent it geometrically on the coordinate grid?

2. [Pause the video at 3:46]. What are the coordinates of the third vertex of the triangle?

As Sasha and Keoni are completing their algebraic manipulations, Sasha cancels the 20 [7:34]. But then it shows up in the final version of the equation. What happened? Did she make a mistake?

1. Use the equations to prove that each vertex is on a particular parabola; what do you notice?

2. Use the equations to find a “special point” (a point aligned horizontally with the focus) for each parabola; what do you notice? 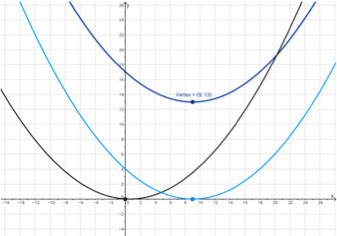