Sasha and Keoni examine the similarities and differences between two parabolas with vertices on the origin but with different distances to the focus. They determine if the same equation could represent both parabolas.

➤ Sasha disagrees with Keoni. They resolve their dispute by testing the coordinates of points on each of the parabolas in the given equation. They conclude that the two parabolas will have unique equations.

1. [Pause video at 3:38]. What else do you notice about the given points and their relationships to the focus and the directrix of each parabola?

Focus students’ attention on conjecturing and providing evidence for their conjectures:

2. How might you predict other values on the blue parabola? What evidence are you using to make your predictions?

2. Can you determine the focus and directrix of each parabola? Explain your thinking. 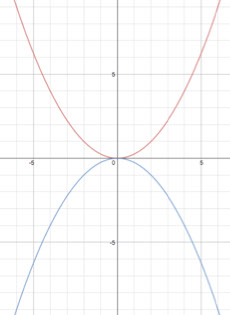