Keoni and Sasha compare the equations for two parabolas: y = x2/8 and y = x2/4. They make two different conjectures about the equation for a parabola with a focus at 3 units above the vertex.

With only two equations, differing patterns can emerge that might not work in the general case.

2. [Pause video at 1:09]. What are your conjectures about the equation for the third parabola?

1. Keoni and Sasha have two conjectures. Who thinks the next parabola will have an equations of y = x2/16? Who thinks the equation will be y = x2/12?

2. Can we have one person to defend the first conjecture? What about someone for the other? Let’s hear each case.

2. Notice the point (a, b) on the graph. Represent the coordinates of the red point using the a and the b.  Explain your thinking.

3. Notice the line segment shown in green. In mathematics, it is a convention to represent distances with positive numbers. Coordinates can be negative, but distances and lengths must be positive. How can you use the coordinates to represent the length of the green line, which is the distance from the blue parabola to the y-axis? 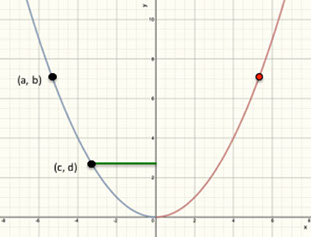