Keoni and Sasha develop an equation for a parabola with a focus at (0,2) and a directrix of y = –2. They use the Pythagorean theorem and the definition of a parabola.

Keoni initially thinks that the distance from a general point (x, y) on the parabola to the directrix will be y + 1 [1:04].

Invite students to engage in revoicing (to say what they hear from someone else in their own words).

1. In responding to the Focus Question 1, ask one student to revoice what another student said about the two lines.

2. After the narrator has highlighted the meaning of the lengths that Sasha and Keoni found for the sides of their right triangle [2:09 – 3:28], call on different students to revoice the meaning of y+2, y–2 and x.

1. The equation y = x2/4 represents the parabola shown in red in the figure below.  The coordinates for some points on the parabola are given. What do you notice about the red and grey points? 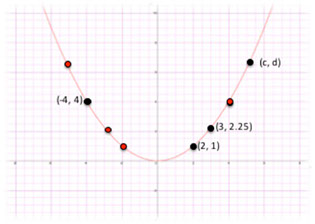 2. Find the coordinates for the red points in the graph above. Explain your reasoning.